Laura Garberick says she knows when the clay she works with isn’t in the mood to be played with or molded into pottery.

“When I’m sitting down and rubbing my hands, I want something that will play with me,” she says.

But there are days when she gets up and walks away because clay tells her she’s not in the mood to play with it and she replies that she’s done for now.

As an artist working in this kind of medium, Garberick says, “I try to be the tool that the spirit uses to bring something into this world. I can see how you can push and play.

Evidence of the spiritual journey that surrounds and guides her creative talents is on display in her studio next to the Pennfield Township home she shares with her husband with whom she has two adult children.

The studio contains three electric ovens, two in the back and one in the front which share the space with a machine used to flatten clay, shelves which hold many containers of enamels, and a few other shelves which hold finished orders and parts available for sale through his company — Garberick Sandstone. The front room is dominated by a rectangular table where she and her clay alternately agree or find themselves at odds. 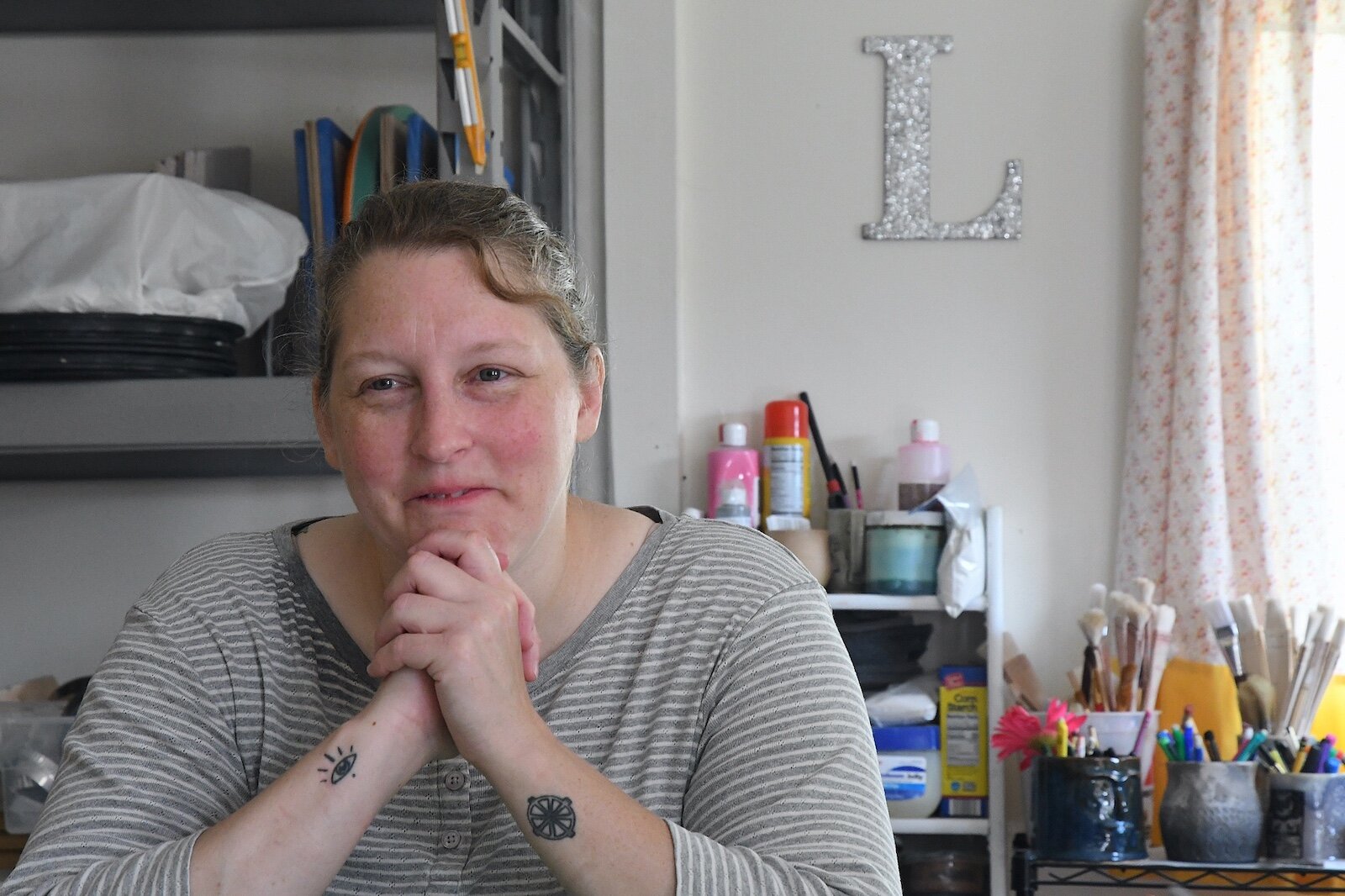 Laura Garberick talks about her life and her passion for the art of stonewareThe space is enclosed by walls painted yellow.

“I chose yellow because yellow is a happy color. It’s a healing space,” says Garberick. “I have people tell me they’re having a bad day and I tell them to come to the studio and get your hands dirty. If you have something good you should share it, that’s how you become a light in the world and that’s what artists are supposed to do. I take it seriously.

Garberick says she learned to become that light for others through a friend with multiple sclerosis who counseled her after she fell ill at the age of 32 with a severe case of Lyme disease that wouldn’t be not diagnosed for six years.

This friend, who has since died, encouraged her to take a pottery class which she started taking at the Battle Creek Art Center in 2014 after falling ill.

“She taught me when I got sick that I had to find something to stay sane in a society where you’re really defined by what you do. When you suddenly find yourself in a situation where you can lose all your identity, she said that’s how you end up,” says Garberick.

The illness left her virtually unable to care for herself or her family, leaving her with feelings of anger, frustration and hopelessness. 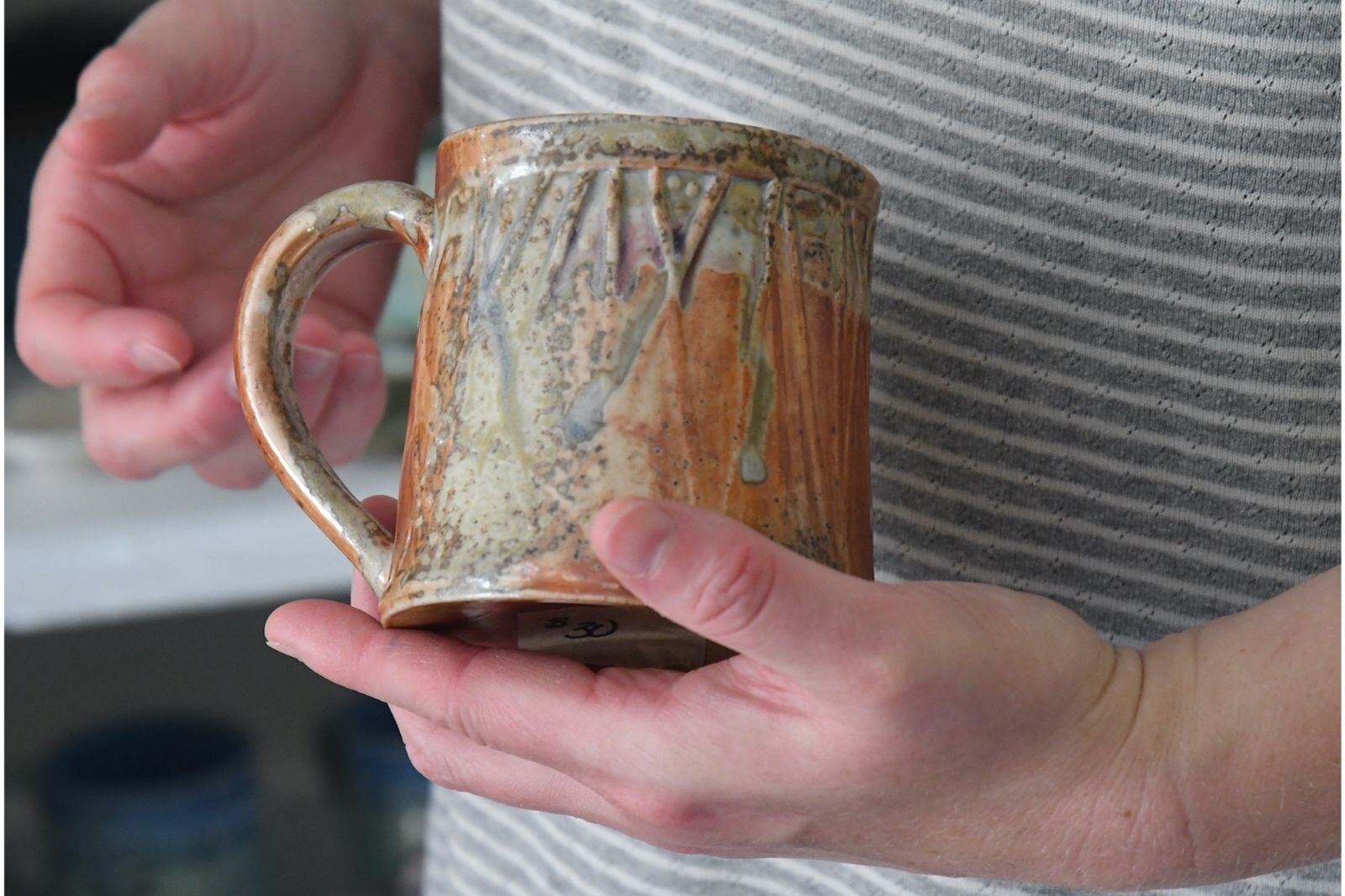 Laura talks about the designs of this mug.“I felt like even my worth as a wife and mother was compromised. I always defined myself by what I could do and what I could contribute and when I wasn’t really able to give that, it cost me a lot,” she says. “I was really depressed for a few years. I really wanted to die. For about two years when I first got sick, I was literally on the couch. I could listen to my husband and children in the other room. I felt so bad because I am the mother and they take care of me.

One winter day, two years after the onset of her illness, when she was alone at home, she decided that she would kill herself because she could not go beyond what the illness had given her. doing physically and mentally. She didn’t want to live like this anymore.

Garberick had planned to leave a note for her family, but she was so tired that she couldn’t muster the strength to follow through on the decision to kill herself, let alone write that note. This realization was accompanied by extreme anger and emotional pain.

A chance encounter with a cardinal would prove to be a turning point.

“I saw this little red flicker coming through the window. It was a cardinal. with each other,” Garberick says. “In that moment, I realized that I wanted to live, and no matter how harsh the environment, I was going to find a way to make it work and be happy. .” 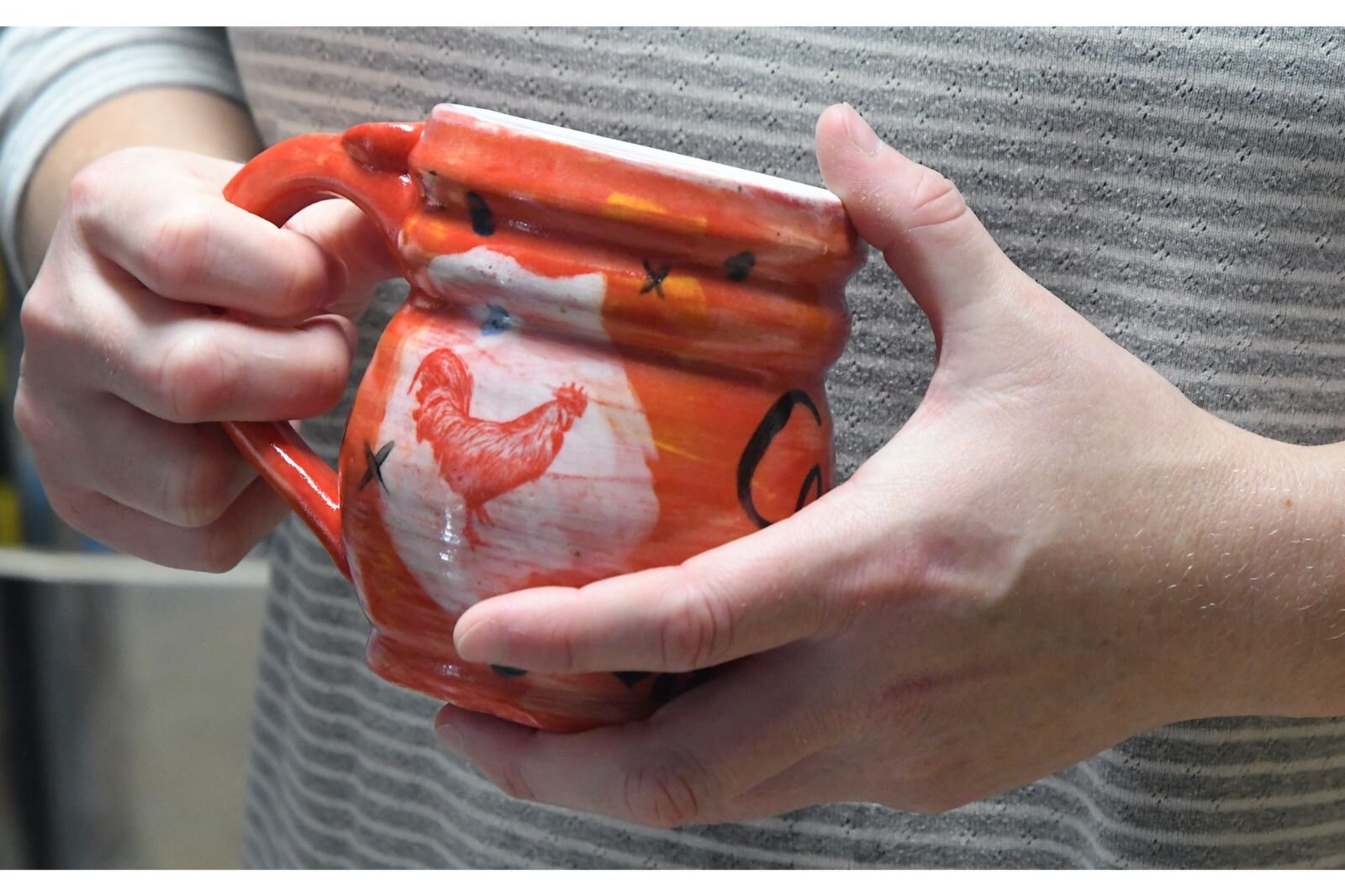 Laura tells how she made this colorful mug.Before the disease set in, she was a massage therapist, a vocation she chose because she likes working with her hands.

“My hands are actually my favorite part of my body. When I got Lyme disease I had to use a wheelchair and couldn’t use my hands. I got treated and got better , but I was never the same again.

Her work at the Art Center began after she started working with polymer clay at her home. She couldn’t get out because her hands and legs didn’t work when she left. Once her illness improved and she was able to venture out, she said, “I thought if I liked polymer clay so much, let’s try the real stuff.”

On good weeks when her disease is under control, she spends around 20 hours working in her workshop, but the norm is between 10 and 15 hours. She recently returned to her studio after taking three weeks off to recover from a seizure.

“I was down for a week with it and after that I couldn’t really recover quickly,” she says.

Just over half of the pieces she creates are custom orders. She also sells her work at art fairs and donates pieces sold to benefit various non-profit organizations. While she would like to do more, she is at the mercy of her illness and says, “I am a small potato in terms of how much I can produce because I am limited by what my body can do. 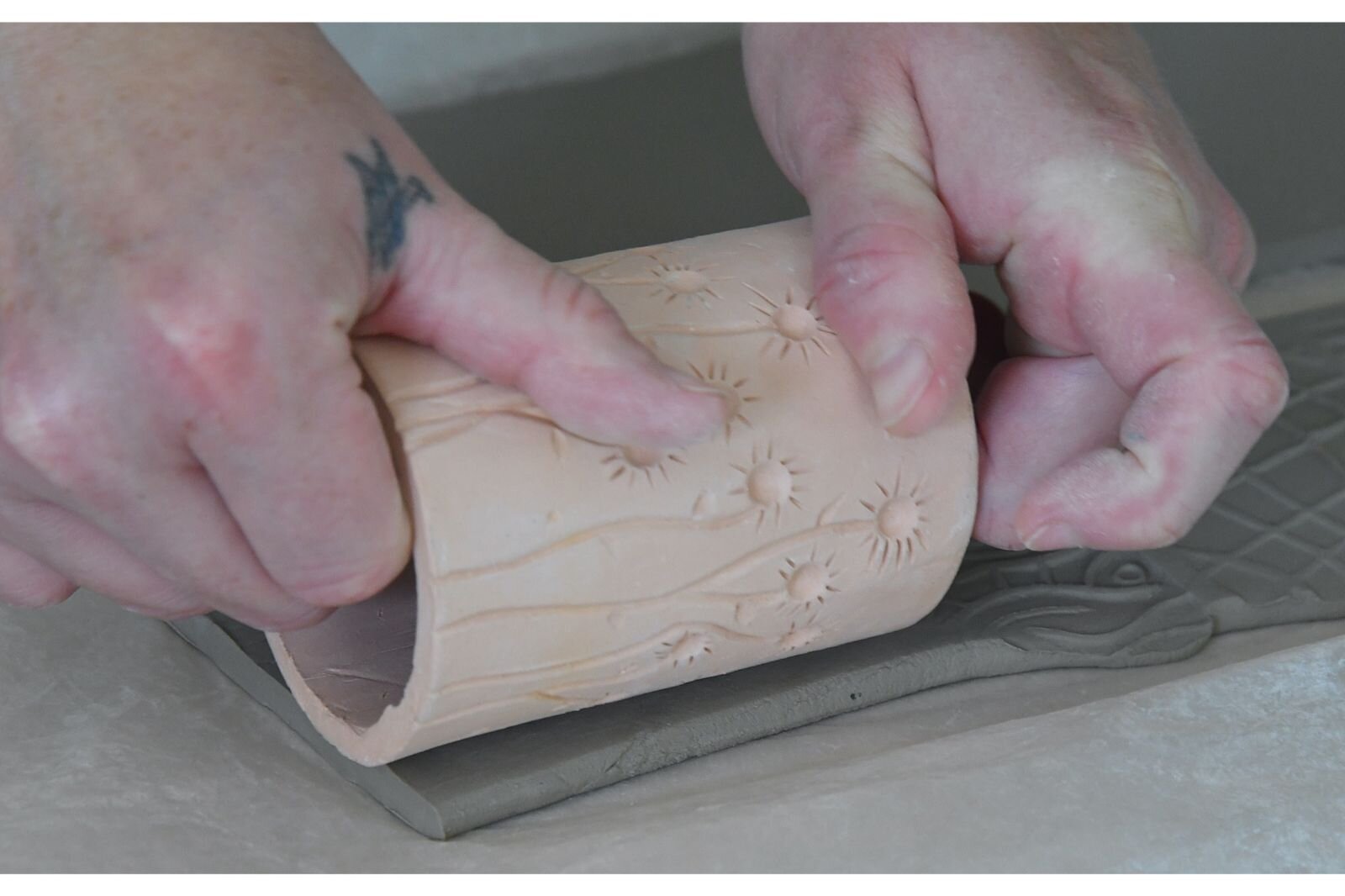 Using a small rolling pin, Laura makes a drawing on clay.Mugs are by far her most requested item, followed by planters and fairy houses. She also receives a good number of requests for urns for creamy animals.

“I love making ballot boxes and I don’t usually photograph them because they are so personal to people. There’s something sacred about it and I don’t like making money off of people’s pain,” Garberick says.

His inspiration for the look and feel of urns and other pieces comes from graffiti, machinery and nature. For her, the latter two are very similar as they each involve clever design that has function and purpose.

“Clay is not only pretty to look at, it has a function,” says Garberick.

She embraces what she calls “functional flaws” in her pieces. These flaws can be anything from an unintended mark caused by one piece being too close to another during the firing process to a glaze that may not appear as it was intended to. ‘be. 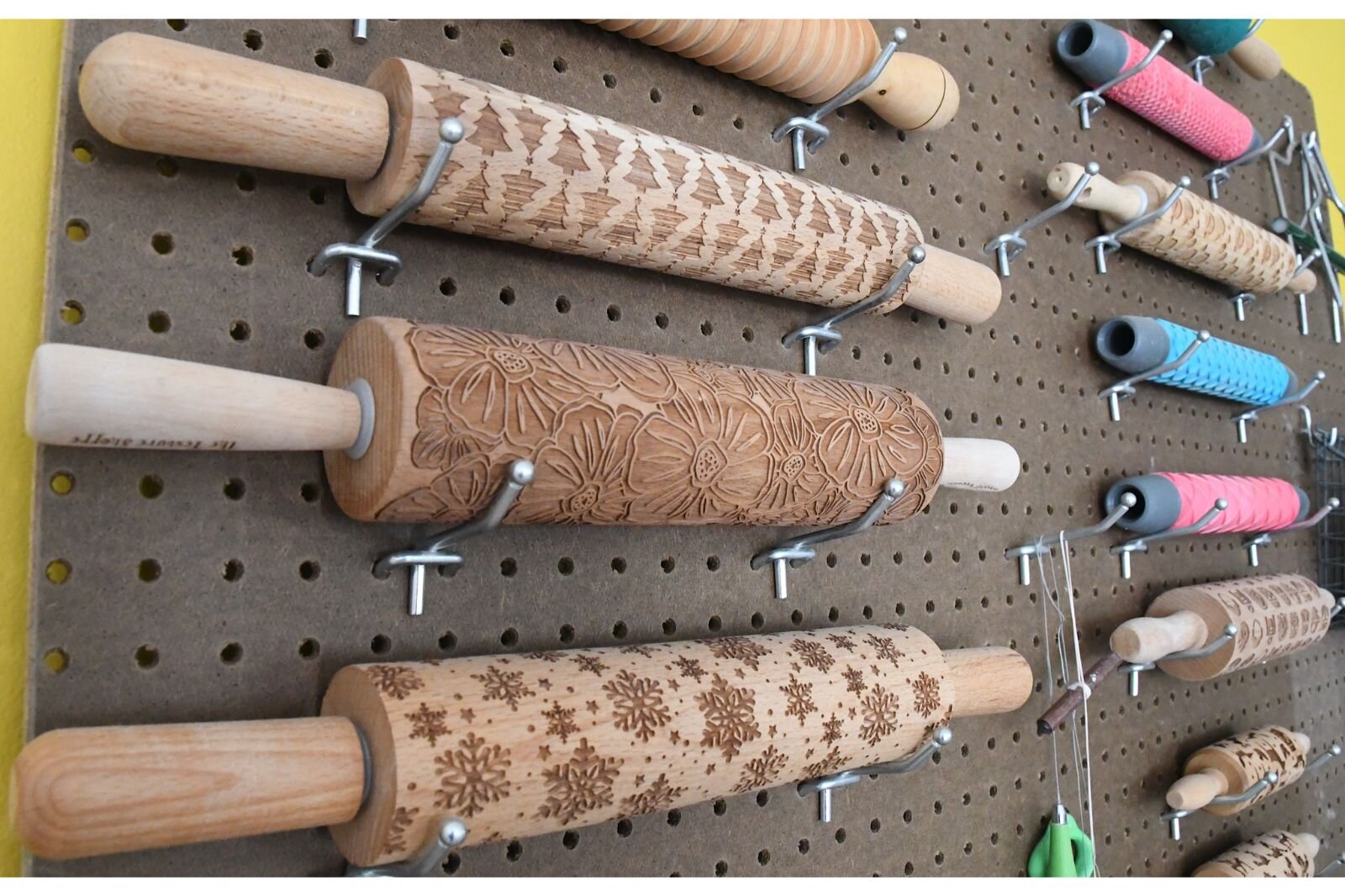 Laura uses a variety of rolling pins to create patterns on clay.“There’s always a level of unpredictability when you’re trying to recreate something because when it’s triggered, the outcome is a little different each time,” she says.

Similar to the conversations she has with clay, she also “interviews” her glazes to see if they will suit something she is trying to create.

“Part of my interview process with Enamels is ‘Are you a good fit for this job?’ I look for specific qualities,” she says. “I glorified test tiles to test a clear glaze on underglazes, so when I go to paint I have a good idea of ​​what the color will look like. Once finished.”

His pieces feature both smooth finishes and texture. She used to use rolling pins with designs etched on them and now creates her own textures using a variety of objects to introduce lines and patterns into the clay. 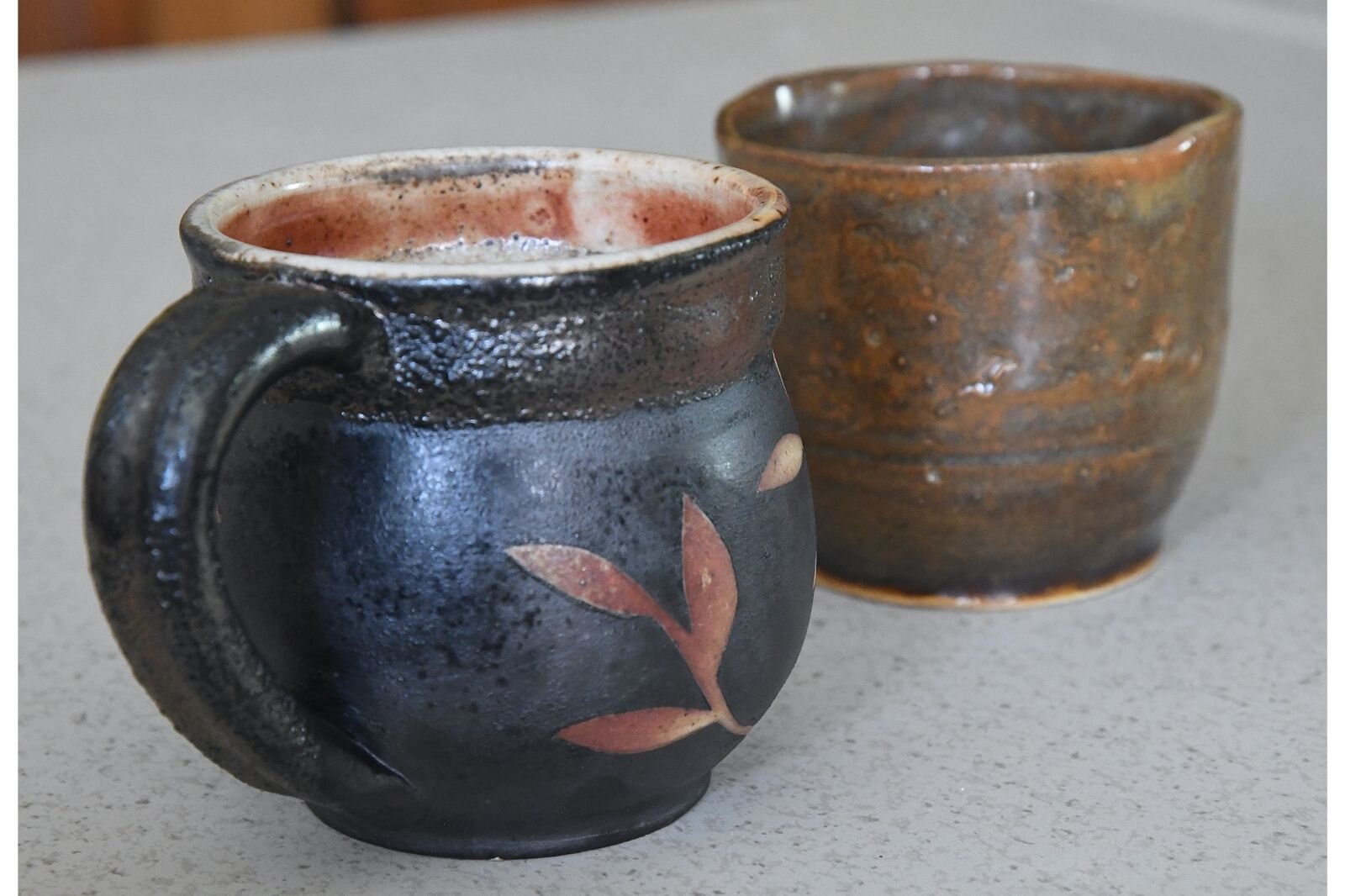 One of Laura’s favorite pieces, a mug, is to the left of her very first creation.“I’m always looking to put more of my hand into it and that’s the difference between a manufactured part and one that’s made here,” Garberick says.

Sitting at the table in her studio where she gives shape and function to pieces of raw clay, she says her work has given her meaning and identity.

While holding the mug that launched his pottery career, Garberick says, “The first thing I threw on a potter’s wheel was supposed to be a mug. It wasn’t pretty, but it gives me a point of reference for what I can do now and how far I’ve come.