Sara Marie L Berthelsen specializes in making and embroidering kamik — long boots made of sealskin with other animal skins sewn onto them.

“For me, it’s very important to keep the traditional way of making the kamik,” Berthelsen said, adding that the survival of the Inuit people depended on women. Having excellent craftsmanship skills and making good quality kamik ensured waterproof footwear for hunting in the snow and prevented kayaks made from sealskins from sinking.

Today, the Greenland national costume is reserved for special occasions, including weddings and graduations. Berthelsen, however, has bigger aspirations for traditional clothing.

“My dream is for children in Greenland to start wearing kamiks again in their everyday lives,” she said. 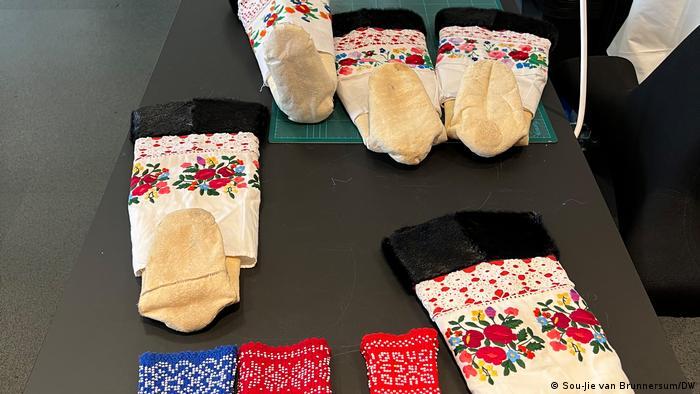 The Inuit of Greenland traditionally wore kamiks made from animal skins, with European fabrics and glass beads added later.

The craftsman has been busy at work. Greenland is experiencing a growing demand for traditional costume, especially among the country’s youth, who are increasingly expressing political desires for national independence.

“Young people are starting to feel more proud to be Greenlandic. Many want to put the colonial ties behind us and therefore embrace the costumes,” Berthelsen said.

Greenland was a Danish colony until 1953 and is now a semi-autonomous territory of the Kingdom of Denmark with limited autonomy.

The Arctic nation’s colonial past began with Danish-Norwegian priest Hans Egede, who arrived in 1721 to establish missions. In 1953, Denmark unilaterally changed the status of Greenland to a constituency of its kingdom.

From 1979, Greenland gained more autonomy and its own parliament. Yet many Greenlanders, citing the continued dominance and control exercised by Danish authorities and personalities in all spheres of Greenlandic life, continue to fight for national independence.

These tensions also manifest themselves in the arts. During Danish colonial rule, Inuit culture was systematically suppressed, weakening transmission between generations, with effects still palpable today. For example, the Inuit practice of tattooing, which missionaries attempted to eradicate, is only beginning to recover more widely.

Maria Paninguak Kjærulff, a visual artist, writer and illustrator from Nuuk, told DW that she sees art as “a way to express cultural identity and leave a personal mark.” Her latest project, a children’s book, aims to honor and celebrate Inuit culture and traditions.

The story tells of a Greenlandic girl who embarks on an adventure to discover her values ​​and skills, meeting some interesting friends along the way. The book tackles universal themes such as being faithful to oneself. 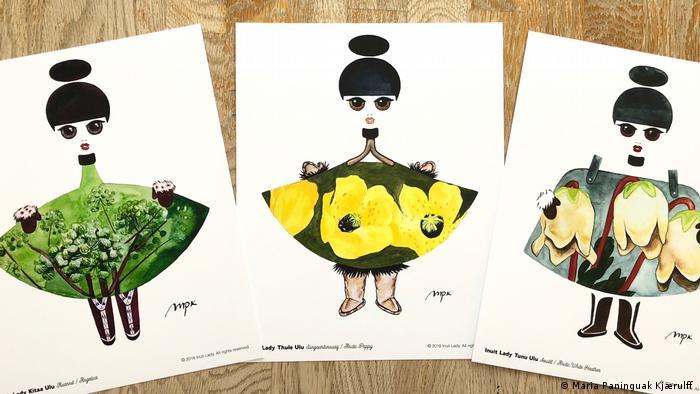 “It’s important to me that kids here in Greenland have a world they can relate to, with a Greenlandic girl in it, written by a local Greenlander,” Paninguak Kjærulff said. “Making art is essential for Inuit artists because it includes our perspectives and representation matters.”

The story takes place in a “comfortable and ordinary” Greenlandic house, but contains magical Inuit cultural and traditional elements.

“When I started, it was a revelation for me to have a voice. I can decide everything in the universe that I create, and I hope to create a universe that is inviting and warm,” she said. declared.

Tradition with a modern twist

Sascha Blidorf is a jewelry designer from Qaqortoq, South Greenland. She adds a modern twist to her beadwork to reflect the continuing evolution of Greenlandic jewellery.

“I’m inspired by the colors of nature in Greenland. It’s a mix of modern and traditional style,” she told DW. 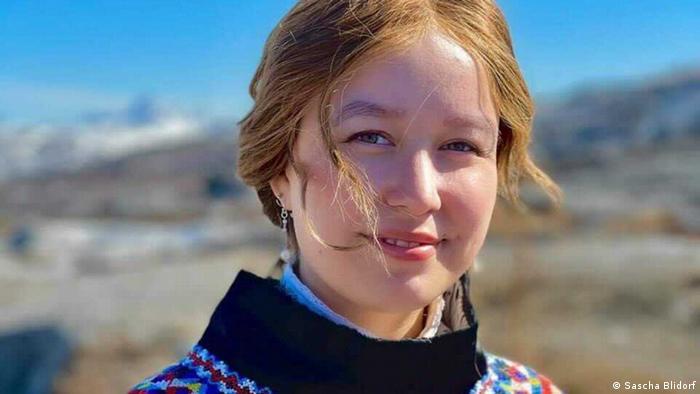 “My art means that I can show my indigenous identity in a more modern way that fits this modern world, not to mention my culture and where I come from…for me, it is extremely important to show our art and to keep doing it,” she said. .

The artisan sells his products worldwide using social media platforms such as Instagram. Its parts can be worn as part of the national costume or as part of everyday clothing.

“Making pearl jewelry is part of our history,” says Blidorf. The fur and skin used in Greenlandic jewelry and clothing usually come from hunted animals. “It’s not like we kill animals to make jewelry, but to eat. In our culture, we respect nature and animals, so when we kill animals, we use every part of them,” he said. -she explains.

Arts and crafts “mean something to us and strengthen Inuit culture in Greenland,” Blidorf says, adding that she feels “complete” when she wears her jewelry.

“Native Inuit were told to “forget” their culture because of colonialism. But through art and craft, we can never forget where we came from and who we are.”

There is no historical tradition of ceramic making in Greenland. But potter Nuuna Papis Chemnitz hopes to change that. The craftsman started pottery as a hobby, then soon after opened a workshop in Nuuk. 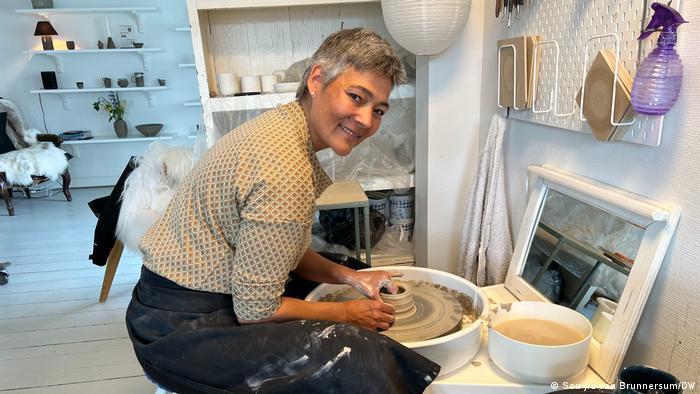 “I love creating pottery to show our Inuit culture and art in a different way that has never been shown before,” Papis Chemnitz told DW. “I think it’s important for me and for other Inuit to show something that we left behind to westernize ourselves. I love being able to combine western material with pottery and Inuit art,” she says.

Traditionally, the Inuit of Greenland used soapstone or walrus ivory to create art, the craftsman explains. Cooking utensils were mostly made from Canadian driftwood or stone. Cutlery was not introduced until much later.

“My mother didn’t use a knife and fork until she was seven. Before that, she used the ulu [traditional women’s knife],” she says.

The ceramic artist paints or incises Inuit-inspired motifs such as the qulliq (lamp) in his works. The qulliq symbolizes family, gatherings and warmth – or the harpoon to attract a successful hunt. 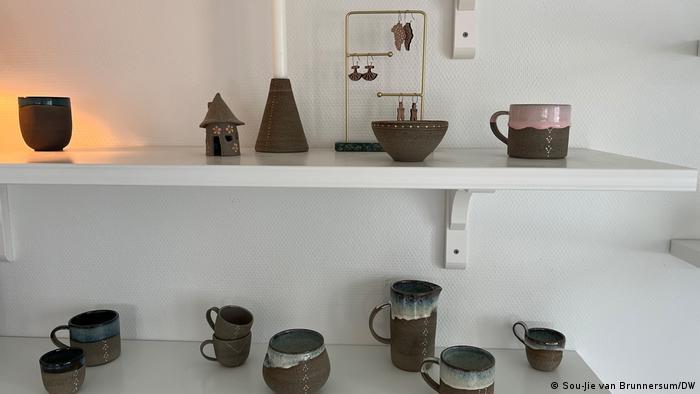 Papis Chemnitz also uses dirt and mud from glacier runoff to make special dots inspired by Inuit tattoos on his work. “Inuit symbols are unique. Inuit Points give you good thoughts and help you remember something special, like your grandparents, your ancestors or your marriage,” she says.

The potter is convinced that Inuit art takes root in an always connected world.

“The world has become smaller; we now see our connection to other Inuit [in Canada and Alaska]and that strengthens our art,” she said. “Inuit art was hidden for many years, but now it’s only flourishing.

Children’s book artist Paninguak Kjærlulf agrees: “There is so much potential for us Greenland Inuit to tell our own stories; I really hope we can be even more proud and take ownership of what we have to offer.”