Emergency personnel have released the name of the missing hiker who has not been seen since Sunday.

Tim Sgrignoli, 29 of Ventura, went missing Sunday afternoon while hiking with his girlfriend in the Tresspass Trail/Gaviota area. Both hikers were suffering from heat exhaustion and Sgrignoli went to get water and help.

Emergency personnel responded to the scene and were only able to find his girlfriend, who was evacuated by helicopter for treatment.

Rescue teams and law enforcement conducted a search for Sgrignoli but were unable to locate him before sunset.

On Monday, around 60 staff, multiple search dogs, UTVs and drones working in conjunction with helicopters search for the male hiker. Teams also use live scent dogs and cadaver dogs.

The search for Sgrignoli was turned over to the Santa Barbara County Sheriff’s Office Monday afternoon.

This is a developing story.

On Sunday afternoon, as temperatures reached over 100 degrees near the coast and higher in the foothills, rescuers received a report of hikers in distress near Gaviota Peak.

At 2:02 p.m., Santa Barbara County Firefighters, Search & Rescue, an air support helicopter and a ground ambulance responded to the area where temperatures had reached 114 degrees.

The call involved two hikers, a male and a female, suffering from mild heat exhaustion. The woman was contacted by rescue personnel and hoisted into Air Support Helicopter 3 and transported for treatment.

Crews are unable to locate her boyfriend who previously left the area seeking help.

As of 5:00 p.m., crews are still unable to locate him and have called in additional resources including state parks, the US Forest Service, and requested a search dog.

The hiker is described as a 29-year-old Caucasian male with brown hair and blue eyes wearing shorts and no shirt.

The Santa Barbara County Fire Department says he may have been picked up for a ride and anyone with information can call law enforcement. 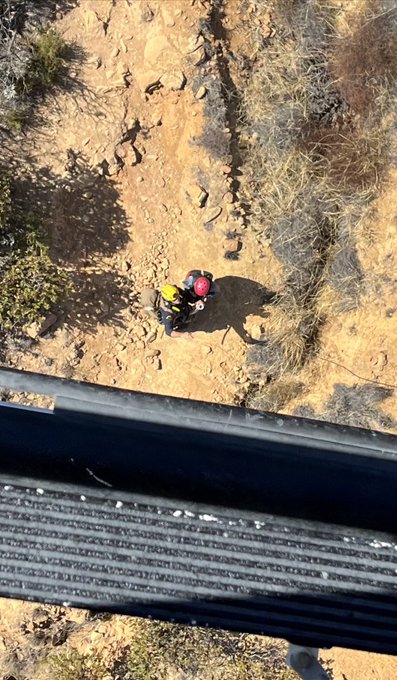